It hasn’t taken David and me long to learn things about Charlie. He’s pretty much who he said he was on that Saturday at the shelter. No false pretenses. No game playing. Just a laid-back lab with soulful brown eyes. 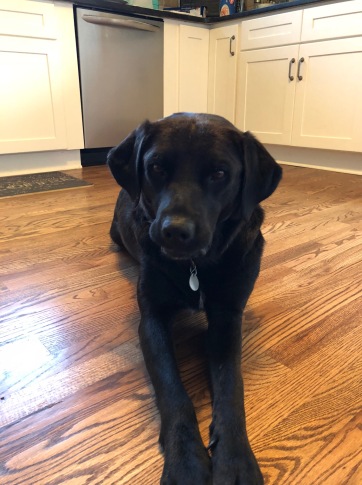 David and I do suspect that Charlie is a bit younger than everyone guessed. Maybe he did try to cover up puppy tendencies. He likes to gnaw on stuff. The cushion, the rug, and his new dog bed. Or he’s in the toddler stage because he acts out by chewing up stuff when he doesn’t get his way.

In all fairness, Charlie has figured out that we are older than he suspected. Why? We are boring. We are quiet. We like being on the porch, drinking our coffee, eating dinner, and watching sunrises and sunsets. David listens to jazz. Charlie has found his own spot in the corner, under David’s feet. He must be ok with the music selection.

Charlie probably has notes about us (I wonder where he keeps them) as we have learned the following about him.

I think Charlie is keeping us.