There are certain pursuits which, if not wholly poetic and true, do at least suggest a nobler and finer relation to nature than we know. The keeping of bees, for instance.

I can’t remember how long ago I became infatuated with bees. I do remember asking my Dad if he would consider a couple of hives on the farm. He scowled and shook his head as he told me there was no room for him and bees on the place (I’ve discovered that many folks agree with his view). At the time, I worked a lot and spent many days away from home. I didn’t have time to water a plant much less have bee hives. My infatuation waned due to other responsibilities, but with the promise to revisit.

With retirement on the horizon, I took the beginners bee class offered by the regional beekeeping club. I took notes, asked questions, paid a membership, wrote down member’s numbers, and bought numerous books. I’ve watched more YouTube videos than I can count. As the instructor said in class, ask 10 different beekeepers, get 10 different answers (not what I was hoping for).  Pine hives versus cypress hives. Painted or varnished finishes for the hive. Do I buy Italian bees or Carniola, Russian bees or Buckfast? Negatives include varroa and tracheal mites, brood disease, beetles, viruses, pesticides, and colony collapse disorder. The bees in the colony are the workers, drones and the queen (sounds like a workplace). Have a grumpy queen and the whole colony is moody (sort of like people). Every bee has a purpose and a role (also sort of like people). Face the hives to the south, ensure a wind break, and have water within a quarter mile. If providing a water supply, add a piece of wood so the bees don’t drown. Wow, who knew a bee could drown?

After a couple of months of reading and studying, the romanticized visions of beekeeping vanished. In addition, it isn’t a cheap endeavor. Just to name a few of the necessities; tools, a smoker, beetle busters, wood bleach, and a bee suit. In the early phase of this adventure, I told listeners that I wanted bees because they let themselves out in the morning and they were home by dark. Unlike my neighbor that has sheep that she moves around day to day, and chickens that have to be guarded and thinned out occasionally, I thought bees were the ultimate low maintenance contribution to nature. The joke is on me. I told the hubby that a dog would be easier.

I didn’t chicken out. I picked up two nucs of Italian bees (Benventuo!) on Saturday from a local beekeeper. A nuc is short for nucleus. It means there is an established queen and all the bees have formed a working relationship. If a package of bees is ordered, the queen is foreign to the colony and it takes a little more time for the colony to build (sort of like starting a new job and figuring out how the team works). Bringing home the nucs reminded me of when we brought our newborn babies home. I stood and starred at them. I tried to recall the YouTube videos (Dr. Spoke books for the newborns) telling me what to do.

On Saturday afternoon, I pulled on my white bee suit (looked like the Michelin tire guy) and got to it. I did make the mistake of peeking in at the bees before zipping my veil. Bad idea…..sting directly to the right temple (I’d be mad too if I had been bouncing around in a box). The first hive was torqued. I may have riled them a bit much with the new smoker. Pine needles make great fire material by the way. The second colony was kinder and calmer. I spotted the queen on the second frame. I used less smoke and was calmer myself since the burning pain in the right temple had stopped. I put the top on the hives, added a concrete block, and walked away.

A bit later, I sat in a chair (safe distance)and watched them come and go. Pollen on their legs, buzzing with activity, devoted to their role in the colony, fulfilling a role in our own agriculture cycle, and creating honey that goes on a hot biscuit. I found it peaceful and fascinating. I know the easiest part is over. Now it comes to monitoring for disease, mites, and keeping the queens healthy. The low maintenance thing went out the window, but then again, anything worth doing probably isn’t low maintenance.

Stay tuned. We will learn more about bees together here on Windy Hill.

Drinking my morning coffee, I’m pondering the number of coworkers I have watched retire. I know the number is substantial.  I’ve heard peers say they were counting down to retirement. Funny, some started with the first payroll check. On the opposite end, I know workers that love what they do and cannot image a day without it. Sadly, life happened for others and retirement was the forced alternative to the best laid plans.

At retirement receptions, I’ve witnessed childlike giddiness at the thought of throwing away the alarm clock. I’ve also seen tears of joy, indecision, change, and fear. Through each event, I smiled, sniffed, congratulated, sympathized, envied………..and then went on my merry way. I would go back to my desk, tackle the next project and never ask—–what exactly are you counting? I assumed it was days left to work (I admit I had a pile of paperclips), but what do you count when you reach the official day?

It’s my turn. My retirement breakfast has come and gone. Watch in hand, it’s just a couple weeks before the official date. Dang, when did May 1 get so close to the doorstep?  I should be counting something. I should have paid more attention, asked more questions. I mean, what exactly does one count with the official date so close? What do you count when the paperclips and the paycheck are gone? Is it days, hours, expenses, or projects to do? Is it the pounds you gain now that I’m cooking? Is it the number of items on the honey-do list before “honey” explodes? Is it the things that may drive your hubby crazy now that you’re home everyday? (He doesn’t like the way I load the dishwasher:-)

I figured it out. It’s BLESSINGS. That’s what you count.

These are the things I’m counting. Blessings.

Retirement is not the end of the road. It’s the beginning of the open highway……………..

Life is good….but cold and windy today……. on Windy Hill. Adventure awaits…….well, when it gets warmer…..

I didn’t post a blog last week. My daughter and the two grandkids were here all week. Need I say more?

Our daughter Kelci is on maternity leave after the birth of our grandson on February 14th (a valentine baby and also Dad’s birthday). After being holed up in her house for six weeks, she needed a change of pace. Her husband Will had returned to work at the medical clinic, the baby was suffering from a touch of acid reflux (we called it colic but it still means nonstop crying), and their 2.5 year old daughter was adjusting to a new brother by NOT sleeping in her bed. No matter the age, sometimes a person just needs a visit home.

The kids arrived on Saturday and the weather misbehaved all week. We hoped for warm days and less wind. We got rain, cool temps, and brutal gusts (the kind that flips the outdoor furniture). My friend from North Dakota was also here a few days (she and a couple of other friends surprised me with their visit to my retirement party) and she brought sundresses. They stayed packed in her suitcase.

Despite the wet weather, we didn’t allow it to dampen our spirits or curtail our fun. Highlights of Addison’s week were visiting the neighbors. New lambs were born. Betty Ann became the proud mother to Fiona and Franklin. There were also eggs to gather (a few didn’t make it to the house), chickens to feed, and sheep to pet. We had one nice day of sunshine and Addison agreed to a ride on the 4-wheeler if granny agreed to come along. We also squeezed in some baking time. 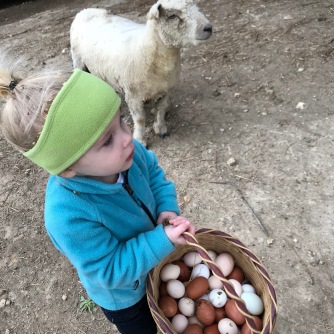 Highlights of Rylan’s week were snoozing peacefully in his swing and being fed whenever he was hungry. He had longer spells of alertness and gave us all some big smiles (no not gas, real smiles). He was held, sniffed, and rocked by everyone. We laughed at his arm movements and boxing jabs.  It’s probably because he is so sore under his arms after being tossed around like a sack of potatoes. He was a trooper.

I believe Kelci had a few nice moments herself. She made it through a whole cup of coffee a couple of mornings without having to nuke it multiple times. Although the weather wasn’t great, she witnessed a couple of nice sunsets. She had a spinach and cheese omelet for breakfast almost every day and took a hot shower without listening for the baby to cry. It’s the little things.  Will arrived on Friday and our son Nelson joined us for dinner. One of the peaks of my week was to have the entire family together for a few hours. Laughter is always on the menu.

On Saturday afternoon, Kelci and Will packed the car (packed is right with swings, diapers, Easter baskets, clothing, 2 car seats, etc.) and headed south. Like all parents with small children, they hoped their timing of just feeding Rylan and Addison’s nap time would carry them home in a reasonable state of peace. It’s always a little sad to see them go………Now, the house is quiet. The refrigerator is empty. Granny needs a nap.

It was a nice week here on Windy Hill.